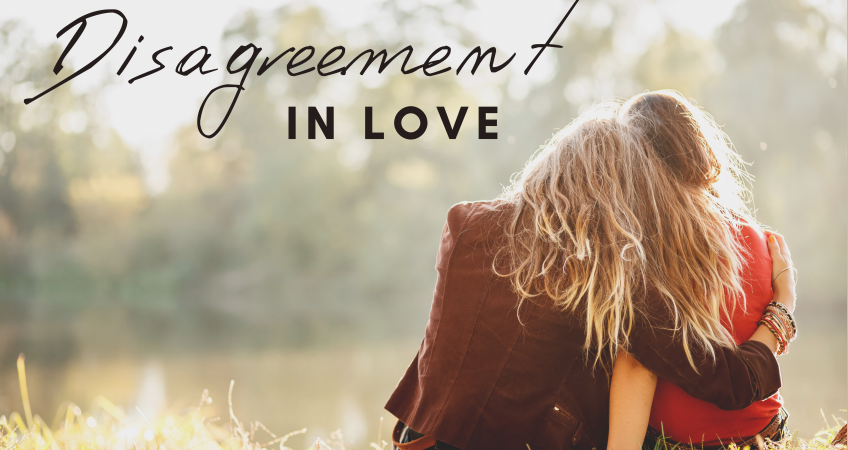 One day a few months back, I got a call from friend while I was out running errands. This particular friend doesn’t call often and normally texts, so I knew something was up. As we spoke for a few moments, things seem okay – light chit-chat – but I could tell in their voice that something was on their mind. Finally, they opened up: “I’ve decided to stop attending church with X organization, and I’m going to be attending with Y-group.”

I’ve been in this scenario, and variations of it, a number of times over the years. If you’re reading this, you probably have too. So, how do you respond? You have a number of options: Do you immediately reject them as a heretic and hang up the phone? Or do you avoid conflict by pretending to sympathize, while, in reality, you couldn’t disagree with them more? Neither is exactly ideal.

I bring this example up as an illustration of the fact that while brethren may at times disagree, they can do so with a loving attitude. The how of doing this can be very difficult. I want to provide a few points that may be helpful to accomplishing this.

Before getting into tactics, you might wonder: why even bother? One big reason to consider is that being able to navigate disagreements well reflects the skill and attitude of a peacemaker.

The writer of Hebrews admonishes us to “Pursue peace with all people, and holiness, without which no one will see the Lord (Heb 12:14).” Paul also instructs the Body to “If it is possible, as far as it depends on you, live at peace with everyone (Rom 12:18).” And again, “Therefore let us pursue the things which make for peace and the things by which one may edify another (Rom 14:19).”

It seems clear that peacemaking is a fundamental Christian behavior. To do that, you have to learn how to disagree in love and have uncomfortable conversations. Otherwise, there wouldn’t be a need to make peace. It would just be there. Like anything worthwhile, it takes effort.

Another thought to consider is that Jesus himself said that peacemakers would be called sons of God (Matt 5:9). If that’s not worth the effort, then I’m not sure what is.

The scenario I described earlier fits the definition of a “crucial conversation”. According to the book, Crucial Conversations, a crucial conversation is “A discussion between two or more people when (1) stakes are high, (2) opinions vary, and (3) emotions run strong.”1

When faced with such a conversation, if not careful, people can generally fall into one of two types of behavior. We can tend to either react with “silence” or “violence.” We retreat or attack the other person. Neither reaction is desirable because they can push us out of meaningful dialogue with the other person. To have a successful crucial conversation, you have to begin with examining yourself, so that you can be aware of your emotional state. By being aware of this, you can exert control over yourself and how you react.

It’s worth meditating on your interpersonal skills. In prayer, ask God to reveal to you where you are impatient, where you make assumptions, speak too quickly, or deceive yourself. This will allow you to become aware of your own emotional state and begin developing the art of self-control (Prov 16:32; Gal 5:23).

During the conversation, pay attention to how you’re feeling. For example, my tendency is to respond with silence; I shut down and don’t want to engage. I can even feel it physically. My whole body tenses up and cramps. When I notice that happening, I know it’s time to step back for a second, take a breath, and just think so that I can compose myself and continue.

Next, consider how you arrived at that feeling. Often, the reason for how you might react has to do with the meaning that you attach to what the other person is saying. This is why you can have ten different people hear the exact same thing, yet have ten different reactions! For example, if you tend to be conflict-avoidant, in your head you’re likely constructing the worst possible scenario to unfold if you fully engage: “What if they won’t like me?” “I might upset them?” Or if you tend to react with violence, you could be taking what was said completely personally, when it’s not meant that way at all. Question and examine your own assumptions.

One more key thing to consider is to ask yourself what you want to actually accomplish with this conversation. To do this, here are a few questions you can ask yourself:

In the case I started with, my friend had made their decision by this point. My motive was not necessarily to persuade them otherwise, but to be a good example. I wanted to preserve the friendship, while also being clear about my own thoughts and my boundaries.

So, as you’re considering how you approach the conversation, remember Proverbs 18:13: “He who answers a matter before he hears it, It is folly and shame to him.” This leads us to the next topic to consider for navigating difficult conversations: effective listening.

The next step to managing a difficult conversation well is to listen actively. Both parties need to contribute meaning openly to the conversation so that you can understand each other and connect. Out of a spirit of love and humility, prioritize making sure that the other person has ample opportunity to speak and express their heart and mind (James 1:19; Phil 2:3). In the Seven Habits of Highly Effective People, Stephen Covey put it well by saying, “Seek first to understand, then to be understood.”

For the other person to really open up and share, you have to make it psychologically safe for them to do so. Otherwise, they can fall into a pattern of silence or violence; withdrawing or attacking. If they believe that you’re simply going to cut them off, shut them down, shun them, make them feel stupid, or give them a monologue rather than engage in an actual dialogue, it’s not going to happen.

So, how do you build that safety? The heart of it is that you must really have the other person’s best interest at heart, then learn how to effectively convey this. In Luke 6:45, Jesus made the point that a person speaks out of the abundance of their own heart. Again, consider the previous section, start with yourself. If you don’t really have the other person’s best interest in mind, then nothing else we’ve discussed here really matters.

Next, exercise curiosity. Ask them what they’re thinking, what they are feeling. Encourage them to retrace through their entire thought process to arrive at the conclusions that they have come to. This is highly beneficial to both of you. For one thing, up to that point, they may have never even taken the time to fully think through their thought process. Also, you build some empathy – an understanding of where they are coming from. Even though you may still disagree, at least you have a better-informed basis for your position.

Through this whole process, it is also vitally important to exercise patience. Expressing yourself can be difficult – let alone in the midst of an emotionally charged exchange. So, allow the other person the space to work through their thoughts and feelings. You would probably appreciate the same treatment after all.

Speak the Truth in Love

As the conversation unfolds, there comes the time when you have to respond and open up with your perspective. When you do speak, it should come from a spirit of love, looking to edify and help the other person fulfill their calling (Eph 4:15, 29). In theory, I think most of us are on board with the idea. Yet, tactically, this can be very difficult. Here’s a procedure that can help you do this effectively:

Start with reviewing the least controversial facts that you both agree on. In our example, a minister had made some statements that were personally inflammatory to my friend. We discussed the details of the matter. This was a fact. It happened. His conclusion led him to a lack of trust and confidence, eventually leading to the decision to look elsewhere for leadership. This was where we disagreed.

As you review the facts, transition to the logical progression of how the conclusion was reached. This is fundamental to speaking persuasively. Start with the facts, then outline step by step how you arrived at your conclusions. While I could empathize with my friend, I felt that overlooking this sort of behavior was important for the sake of unity and working effectively together. I also shared a bit about similar situations I had been in to reinforce the fact that I related to his struggle very personally.

In this scenario, I told him what my thoughts and feelings were and carefully pointed out where I disagreed with his points and engaged in a back-and-forth with him. I encouraged him to share his responses to my statements and then I would answer those responses. I did not attack him; I did not belittle or make fun of his conclusions. I simply shared what I thought in the most tactful way that I could.

I should mention that you have to carefully weigh the circumstances. In some scenarios, it may be absolutely necessary to limit or perhaps cutoff contact with the person. One obvious case would be that if they are continually bringing up a divisive subject in order to promote their own agenda (Rome 16:17). Or another may be if it is a matter of egregious sin (1 Cor 5:11). Though even with that, I have to caveat that if a friend is reaching out to confide in you and share their sins in an effort to seek accountability and spiritual healing, I believe you should make every effort to support them (James 5:16).

You can do this!

In any substantive relationship, disagreements will occur. Even, perhaps especially, amongst us in the Church. Yet, despite this, an atmosphere of love can be maintained and peace gained. Doing this may not come naturally and it may take a lot of practice. But I believe the effort is worth it because I believe that pursuing peace in the body of Christ is worth it. Doing this can help show the world who we are as God’s people (John 13:35).

Tim Reynolds graduated in 2013 from Park University in Parkville, Missouri with a Bachelor’s degree in Computer Science and Geography. He has worked in the software engineering field since then. Tim