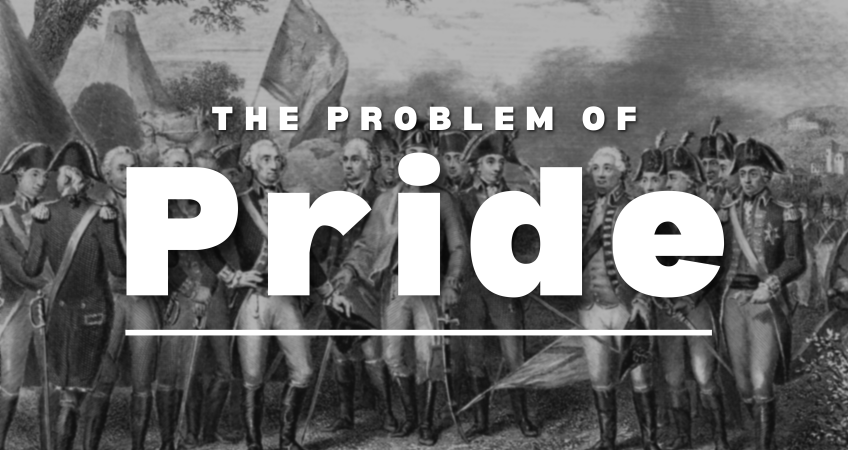 Causes of Dysfunctional Conflict: The Problem of Pride

Ben was a Connecticut merchant in the American colonial period. As his business fortunes rose, so did his resentment of British taxation. At the outset of the American Revolution, Ben was elected captain of the local militia. He organized them into an effective fighting force and presented a bold plan for seizing the British forts at Crown Point and Ticonderoga. The plan was accepted, and the expedition successful, although the undertaking was marred by the fact that Ben was in conflict with fellow officers.

Ben spent a large sum of personal money financing the campaign which created financial difficulty for his family. Added to his financial hardships was the tragedy of his wife’s sudden death.

Eventually Ben caught the attention of George Washington. Washington saw through Ben’s bluster and tactlessness, recognizing him as a leader and good tactician. Ben’s leadership helped the colonial army survive the hardships and defeat of an ill-fated Canadian expedition.

Returning home, Ben found himself faced with charges of forcing Canadian merchants to give food to his starving army. This was a bitter pill to an already wounded pride. Still, he continued to fight for the Revolution and defeated a British fleet on Lake Champlain.

It was obvious that this successful commander was next in line for promotion to major general. The Continental Congress, under political pressure, felt that military leaders should be selected more evenly from among all the colonies. New England had more than their fair share of major generals. Ben was denied the promotion.

Ben was then seriously wounded in the Second Battle of Saratoga and during his recovery he was given command of the garrison in Philadelphia. Having spent much of his personal fortune in the war effort, he decided to enjoy the fruits of his labors.  It wasn’t long until British sympathizers used his extravagant lifestyle to bring charges against him.

This was the last straw. He became bitter and disillusioned. At this point Ben—Benedict Arnold—betrayed his country. Mention the name of Benedict Arnold today and nobody remembers his victories and bravery. All people remember is the crime of treason.

What causes a person to betray his own ideals? Benedict Arnold felt stabbed in the back by jealous fellow officers. He had charges brought against him by British sympathizers. Congress refused to repay money he had spent out of his pocket for war expenses. Eventually, he convinced himself that the leaders of the Revolution were incompetent. He lost faith in the cause of American liberty.

For a person to betray everything he loves and believes, he must first feel betrayed. Once a person allows bitterness over another people’s actions or words to become an emotional obsession, he becomes consumed with a need for vindication. Arnold’s disillusionment in the Revolution was rooted in his concern with personal injustices, both real and perceived. Always a prideful man, Arnold’s pride became more important than his values.

Pride is an exaggerated view of our importance. Pride is a great deceiver. It makes us forget our spiritual principles and centers our attention on what we feel we deserve because of our effort and sacrifice. It changes our focus from how we treat others to how others treat us. Pride sidetracks the effort needed to deal with important issues, and centers our energies on attacking personalities and the wrong actions of others. Character, the internal force to do right, becomes easily manipulated by a drive to be proved right no matter what the price. When we are driven by pride, conflict is inevitable, and the solution is seen as a need to defeat the other person.

It is an inflated view of self and keeps us from both accepting responsibility for hurting others and forgiving others when they hurt us. We want payback. We want to win. We want others to recognize our goodness. We want to defend our “honor.” Jesus taught a different attitude: “Blessed are the poor in spirit, for theirs is the kingdom of heaven.”

Being poor in spirit doesn’t mean walking around feeling depressed. To be poor in spirit is to know your spiritual and emotional poverty without God in your life. When you are poor in spirit, you see the Creator’s greatness and you are acutely aware of your absolute dependency on him.

Jesus told a parable about a Pharisee, a member of a respected religious group, and a tax collector.  Jewish society ostracized tax collectors because they assisted the occupying Roman government. The two men in the parable went into the Jewish temple to pray.

The Pharisee thanked God for his spiritual superiority. He reminded God that he wasn’t dishonest or unjust, nor was he an adulterer or a collaborator like the tax collector. He took great satisfaction in himself as a man who worshipped God and paid his tithes. The tax collector, in realization of his unworthiness before God, “…beat his breast saying, ‘God be merciful to me a sinner!’” (Luke 18:9-14).

Luke said that Jesus spoke this parable because of those people who trusted in themselves that they were righteous while despising others. He taught that God accepted the prayer of the tax collector and rejected the prayer of the Pharisee. Jesus didn’t say that God accepts dishonesty or adultery, nor did He say that we shouldn’t pay tithes. The purpose of the parable is to pinpoint two great areas of religious pride: measuring our righteousness by the actions of other people, and despising others by feeling superior to them.

It is not easy to recognize our spiritual poverty. Each of us is like a little child yelling “Me do it! Me do it!” at the adult who is trying to help until she finally collapses in tearful frustration. Only when we accept our spiritual failure, our innate hostility toward God, and our need for His love and guidance can we finally say to Him, “Father, please forgive me and teach me how to live.”

You can try to ignore God.  You can work hard, play hard, and pretend you’re indestructible. You can act “religious” without really relating to God in your everyday life, but eventually you will have to come face-to-face with how short, and, ultimately, how meaningless your life is without him.

Theodore Roosevelt has always been a fascinating person to me. A close friend of Roosevelt, William Beebe, wrote that after a long day of discussion, he and Teddy went outside to study the majesty of the stars and galaxies in the night sky. After a long silence Roosevelt said, ‘Now, I think we are small enough. Let’s go to bed.’”  In our fast-paced lifestyles, we don’t take the time to witness God’s majesty in His creation. The brilliance of God, revealed in His creation, causes us to appreciate our smallness before His greatness and goodness.

When you experience the utter poverty of life without God, fully appreciate His way of reconciling with you as His enemy, and recognize your own inability to cross the chasm between you and God, then you can have the humility to see others as weak, spiritually impoverished, wayward children of God in need of being reconciled to their Creator. Only then can you recognize God’s power of forgiveness as a way to help another person to repent.  Then you can begin to offer forgiveness as a way to help someone who has sinned against you or ask forgiveness from someone else.

From The Mercy Effect, copyright © 2018 by Gary Petty

Gary Petty is a 1978 graduate of Ambassador College with a BS in mass communications. He worked for six years in radio in Pennsylvania and Texas. He was ordained a minister in 1984 and has served cong